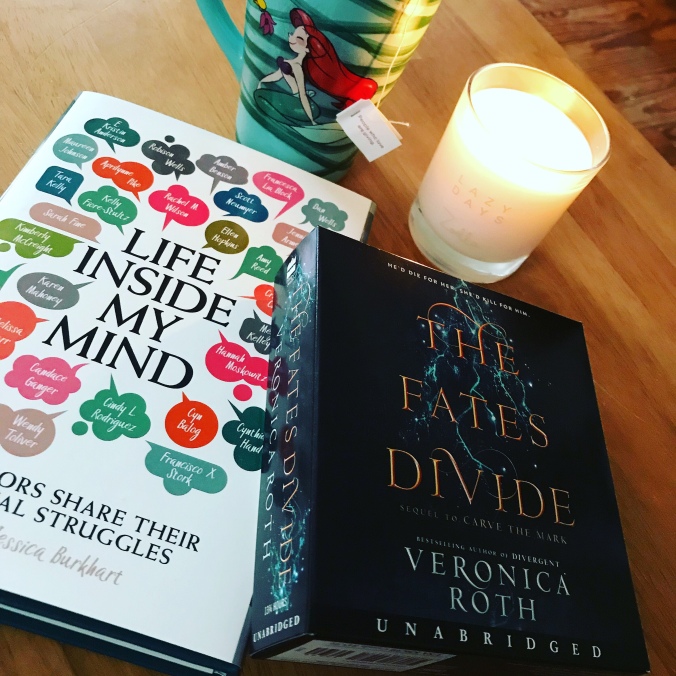 Do you prefer the traditional book or an audiobook? I’m a real book girl all the way, however if an actor I like of doing an audiobook, I’ll definitely give it a listen. These are my newest books (like I needed more) and the ones I’m curling up with on this super rainy day.

The first is Life Inside My Mind, which is a collection of essays about mental health from different writers, including my favorite, Francesca Lia Block. The audiobook is The Fates Divide by Veronica Roth, the sequel to Carve the Mark. Carve The Mark was narrated by my favorite actor Austin Butler, whose voice is just pure butter (or if you don’t like butter, substitute it with something else delicious and wonderful. The point is, he could read the dictionary and it would do things to me). When I saw there was a sequel I crossed my fingers it too would feature that wonderful voice and Haaaalelujah! It does!

No coziness is complete without tea and candles and cats in my opinion. For tea, I’m drinking Yogi Tea’s Healthy Skin (which sounds very tree hugger of me, but I just like the taste) in my trusty Little Mermaid mug, which I got from The Disney Store. The candle is from the Zoella Lifestyle collection and it aptly names Lazy Days. As for cats, Damon is one of a kind and you can’t have him. Sorry.

As many of you fashion lovers know, yesterday it was announced that Polyvore was being replaced by SSENSE, a company I personally have never heard of. There was no warning, no lead up time to when the change would take place. One hour it was there and the next it wasn’t. What was once a unique, creative, and social community where everyone had a passion for fashion and beauty and product sharing, is now just essentially an online store.

For me personally, Polyvore really fueled and helped me get more into clothing. It allowed me to find stores that I otherwise would never have heard of, see clothing or accessories I probably would never have bought, except that someone created a set and showed me a way it could be worn, inspiring me to get it and put my own twist on it. It featured items from high end stores like Barney’s and Nordstrom and Bergdorf Goodman all the way to something more attainable, like Amazon and Target and Walmart. And the sets people created often mixed the two, proving that it’s never about the price tag. It’s about style. It was a place I never tried to gain followers and likes, but I got hundreds of them anyway, without trying, just being myself.

Unfortunately, it was also where I had a LOT (and by a LOT, I mean, a majority) of my content organized for this blog. Apparently, the site is offering members a chance to request a download of their collections/creations, but I haven’t received my download yet and I honestly don’t know what that’s going to look like when/if I do.

So. In the meantime, I’ll still be trying to post, but I’m probably gonna need a big to find a new outlet to get myself organized and plan some new content. If any of you know or can recommend a site very similar to Polyvore, I’d love to hear your suggestions.

In the meantime, a hearty f*ck you to everyone involved in this merger. It could have been handled WAY better and I personally will be avoiding SSENSE as much as I can.

Welcome to my new blog series “What I’m Coveting.” I know coveting is a sin but the title is catchier than “What I saw and wanted but can’t have right now so while I’m grateful for everything I have this would be nice.” These will be short little posts done whenever the mood strikes, those times when I’m browsing online stores and adding things to my wishlist (it’s retail therapy without spending money), the things I want to share but can’t or haven’t actual bought myself, or when I just want to drop hints about gift ideas. So, probably daily. Sometimes it might be an entire wardrobe of things. Sometimes, just an item. It’s whatever I feel like, damnit. (I know. Cursing is frowned upon too).

So today, I bring you, what I’ve coveting from Macy’s, and we just have two items, both in the beauty category.

The first is a lipstick by Smashbox in the Be Legendary matte lipstick in “Infrared,” which is a true red shade. I know. I have plenty of lipstick and plenty of red lipstick, but not this shade and not in matte. It’s $21, so a bit pricey for a lipstick. But it would be a nice splurge! 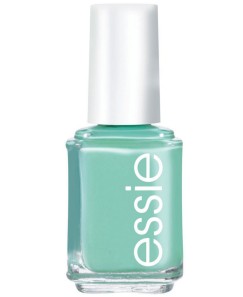 The next (and last) is a nail polish by Essie. Maybe it’s the leftover Easter vibes that has be eyeing this shade called “Turquoise & Caicos,” but whatever. It’s $9, which to me, anything under $10 that you actually want is a bargain.

Both these can be bought at macys.com if you want to grab them for yourself and make me jealous of you! 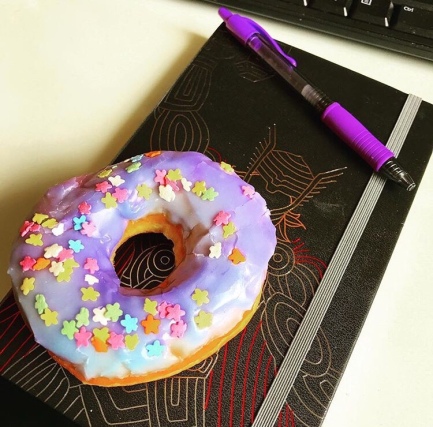 Happy spring! Here in New England, sometimes it feels like it, sometimes it doesn’t. Right now, we’re in a “doesn’t” period. Anyway, you’ll notice there haven’t been any posts this month and there hasn’t been a real reason for it. I’ve been posting a lot on Instagram (@thecailin), but I really need to be cross posting those pictures onto here of the products I’m loving or using or buying. There will (hopefully) be more content this month. One reason is I put a poll on my Instagram stories, asking people what they were interested in seeing me post. Thankfully, I got some solid and honest feedback and so I have some cool posts in the works, one of which will be a series where the first one is going up tomorrow (I know. Whaaaat?)

But onto the music of March.

Again, stuck mostly with my records this month, so hence the One Direction, Lana Del Rey, Simon & Garfunkel, Beach Boys, and John Lennon.

I did a lot of good writing this month and I downloaded some tunes by Halsey, Fink, ZAYDE WØLF, and Pim Stones that got me in the mood.

New music that came out this month includes Jax & Nash Overstreet, Thirty Seconds to Mars (SO EXCITED FOR THE ALBUM THIS MONTH), A$AP Rocky, Johnnie Mikel, Vann, and Rob Pennington.

Oh, yes, and some music from The Hunchback of Notre Dame soundtrack. My roommate and I watched it this month I realized I only had one song in my library. So that’s amended.