Clowns. It’s my experience that most people hate them. Johnny Depp once said, “Something about the painted face, the fake smile. There always seemed to be a darkness lurking just under the surface, a potential for real evil.” My roommate recently confessed that she loved clowns as a kid because she used to watch a documentary about them, but as she got older she didn’t like them anymore. For me, it’s circumstantial. I knew a professional clown and she would do events for our church all the time. Obviously, I was never scared of her. But then I went to Cirque du Soleil when I was 17 and the French clowns gave me a panic attack (it didn’t help that we were front center row).

I think for me what unnerves me about them is that they get in your face and your personal space. I know logically they’re not gonna hurt me, but when you have social anxiety,  a stranger with crusty makeup and a ratty wig getting too close is a nightmare.

When I found out today was National Clown Day, I was sure that was a theme I was not going to do for a blog post. Even though the theme of scary clowns seems to be popping up everywhere. There’s obviously the hype around the new It movie, which I’m ONLY planning to see because Bill Skarsgard, one of my favorite actors, is playing Pennywise. And then the title of the new American Horror Story season is Cult, though if you’ve seen any of the teasers, there’s a distinct clown look to the cult members (which I think I read has something to do with Twisty the clown from the Freak Show season). 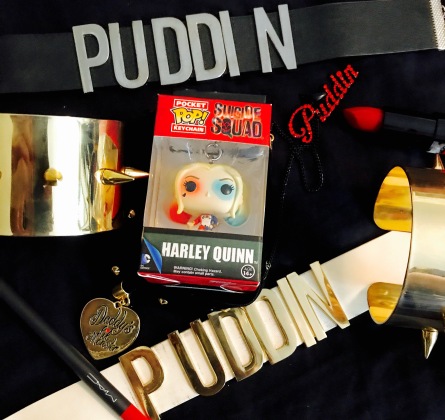 When I was a kid, Harley Quinn was all red and black, rocking that iconic court jester one piece. The movie Suicide Squad was admittedly all over the place, but the aesthetic of the film was undeniably iconic and that had a lot to do with Margot Robbie’s version of Harley Quinn.

Most of the accessories in my collection are necklaces. The one in the picture (and I should note that I did take pictures of me wearing all the necklaces, but some of them, 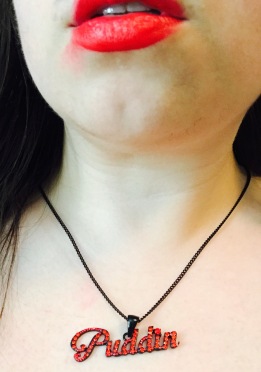 paired with the smeared lipstick looked too, for lack of a better term, kinky) is a red rhinestone on a black chain displaying Harley’s favorite nickname. There are two very similar chokers, both displaying Puddin name again. The cream one with gold lettering looks just like the one in the movie, including buckling in the back, which is actually easier than I thought it would be. However, the letters cause black scuff marks, since they can slide up and down the choker, and this can totally be seen on a cream-colored strap. So the alternative is the black one with silver lettering. This won’t be a replica like the cream, but scuffs won’t show, it has a regular clasp in the back if you’re not comfortable with the buckle, and I don’t know about your wardrobe, but this matches with more of my outfits. The final necklace is a velvet choker with a gold heart displaying the words of one of Harley’s tattoos (and her baseball tee), “Daddy’s Little Monster.”

The bracelets are a recent purchase for me and close replicas of the ones from the movie, the only real difference is that the spikes aren’t as long, which is probably more to your benefit.

I didn’t recreate the entire Harley Quinn makeup look, mostly because I shockingly am out of blue eyeshadow, but if you want to get that bright red lip, I used both a liner and a lipstick. The liner was MAC’s Pro Longwear lip pencil in “High Energy” and the lipstick was Rimmel’s Lasting Finish Matte Lipstick by Kate in #111 “Kiss of Life.” Just give it a smear and you’ve got it down.

So how do you feel about clowns? Love them? Hate them? Indifferent? Do you like getting scared by them in horror movies and are looking forward to the It remake (seriously, I love you, Bill Skarsgard)? Or do you have fonder memories of them from childhood? Or do you prefer a non traditional sort of clown, like Harley Quinn or the Joker? Let me know in the comments!

Finally! My music game is back! July in general was all about regaining my balance. I got my job on track, my writing on track, everything generally on track. So overall, July was a pretty good month. Of course, we start with a Disney track, and this month is the theme song to my spirit animal, Mad Madam Mim, from Sword in the Stone, probably the most underrated Disney movie of all time. Sidebar: she is also the source of my Instagram bio, “I hate horrible, wholesome sunshine.”

The next seems a bit random, but “Story of My Life” got added because the song made an appearance on the show Boy Band (which is AMAZING AND EVERYTHING) and I realized I love this song, but didn’t actually have it on my iPod. Also, my roommate had never seen the video, so I made her watch it because I think it’s hilarious that she cries at everything. She thought she would make it through the video, but then it got to THAT PART (watch the vid and you’ll know) and she went, “Oh, shit. Oh, SHIT,” as the waterworks started. It’s making me laugh even as I type this, which makes me horrible, I know.

Another random is “Crank It Up” by Ashley Tisdale. I really like Ashley Tisdale, but a lot of her music isn’t my jam. However, July was also the month I started working out again (which is still the most horrible thing ever and I didn’t miss it at all), and this is a really good workout tune.

I did a post about my 4th of July, so I won’t go into it again, but I grabbed an older Lana Del Rey Song and Elvis singing an American classic for the day.

New music of the month was a track by Biotin Babies, Armstrongs, the new All-American Rejects EP, and of course Lana Del Rey’s new album, which is fantastic.

I also finally got around to the used bookstore in town, which also sells records, so I got my hands on David Bowie’s Scary Monsters. I already had “Fashion” and “Ashes to Ashes” in my library, so I spent the month listening to the other tracks and, love.

The last track on the playlist went to the theme music from Teen Wolf because the end of the month brought the premiere of the last ten episodes of the series and I’m both excited and upset by this.

Unfortunately, July also brought the death of the incredibly talented Chester Bennington of Linkin Park. Three years ago, I got to see Linkin Park in concert and I remember walking away thinking what an incredible show they put on and how his voice sounded almost identical to how it does on the albums. I knew I wanted to add a Linkin Park track to this month’s playlist, and was at first going to go with the obvious “Leave Out All The Rest,” with “My December” as a contender. But his death got me thinking about what Linkin Park’s music meant to me. This was the band I would play as a teenager when I was sad or angry because it felt good to hear someone else scream out the things that I was feeling and didn’t know how to put into words because I didn’t really know what was happening to me or how to deal with it. So I grabbed one of the songs that represented that time, “Somewhere I Belong.” As I got older, I learned how to shut up and get rid of some of my demons. Chester’s death was a reminder that it could have (and almost did) end a different way for me. I do sincerely pray that he’s at peace and my heart is still broken over the situation, and especially for his family and friends.